Although I’ve been a fan of Microsoft’s virtualisation platform (Hyper-V) for some time, running maybe 30 of ~250 UK based Servers on it (as detailed previously), for admin and resilience reasons we made a decision to go VMware ESX globally; managed through vSphere client and vCenter Servers. 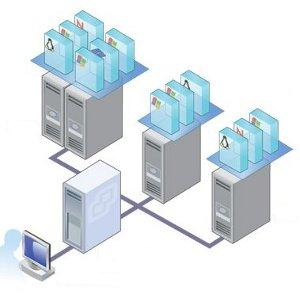 vSphere 4 allows us to aggregate and manage large pools of Infrastructure, Processors, Storage and networking in a dynamic, resilient and flexible environment. I’ve seen massive increase in performance on my legacy kit, even running 12 servers on one DL580 with an average 5-fold increase in performance (at only 30% host CPU) and full-wire speed on a 10Gbps iSCSI SAN.

Using VMware vCenter Converter (P2V and V2V supported) I migrated all my Hyper-V servers over, plus a host of legacy servers, and I love it.

Selecting the option to migrate a powered on machine allows for the import of Hyper-V virtual machines as well as physical machines, it’s a good idea to uninstall the Hyper-V tools after the migration. I also removed any redundant utilities such as HP Array config and HP Management agents.

Although there is a plugin available for VMware P2V conversions, I opted for the VMware vCenter Converter standalone for mine (primarily because I wasn’t scheduling migrations, preferring to watch them go and make sure all OK); works remarkably well..! I came across a few issues however:

A number of my current VMs are presently on DAS, my iSCSI filers being pretty much at capacity – I’m waiting on a couple of new 6 TB units which will enable transferring my data stores onto attached storage – much preferable as I’ll be able to snapshot and flit these VMs from host to host quickly in real time (VMotion). In the meantime, most of the servers have LUNs on the current iSCSI, and most of these servers have migrated successfully but I have one which just will not map the iSCSI LUN to the drive – you can see the LUN in drive manager, but it’s not recognised by windows..!? Ah well, it’s only a dev server..!

What a stunning utility..! Intuitive and informative, easy editing and monitoring of all the VMs and hosts, superb interface. I can’t wait to get the new SAN on line and migrate my remaining DAS datastores – it even monitors the VM and host performance and can move VMs from misbehaving hosts automatically, moving them to a host best suited for the VMs performance.

Much as I’ve loved Hyper-V and believe that it has a place for Server consolidation in smaller environments, for a large network I have to say that VMware vCenter and vSphere kick its arse, definitely worth the investment.

5 comments to “VMware vConverter and Hyper-V or P2V conversions”