Yes – perhaps a little over the top: 2.3 litre, fuel injected, shaft-driven example of British Engineering awesomeness. But I want it. It’s so beautiful…

Taking the Thunderbird in to see Royce at the exemplary Triumph Dealership Youles of Blackburn, he actually sold me the ‘bird originally – if he offers me the right exchange then this beasty could be going home with me.

I only went in to pick up some brake pads… 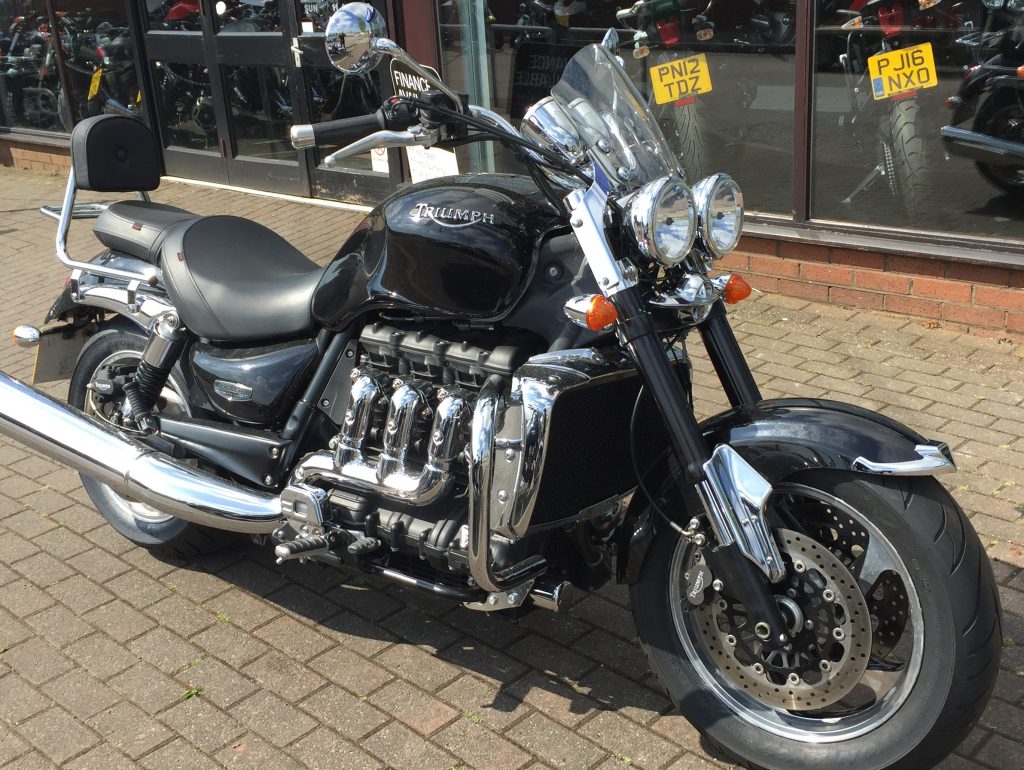 Well… after giving the Thunderbird a good going over and pointing out what flaws he could (very few), Royce of Youles came through with the right offer.

Picking the Rocket up on Friday morning after its pre-sales checks and polish.

Huzzah for Youles of Blackburn.

If you look closely I’ve noticed that you can see yours truly and the Thunderbird reflected in the mirror as I was taking this photo… shiny.

At home – bars raised and more forward, cissy pad removed, put back on and then taken off again (permanently this time). Ugly tank pad removed. 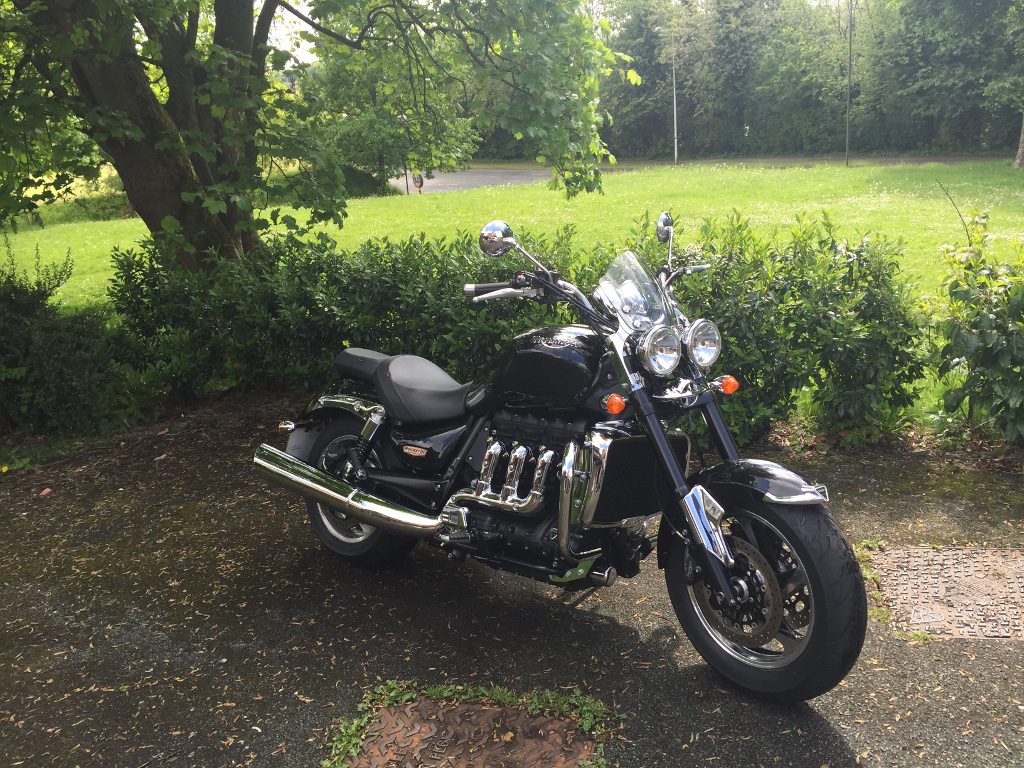 Removing the tank pad was a mission – peeled off easily enough but the glue residue took me the best part of an hour to carefully clean off – petrol did the job for the last stubborn bits, followed by a clean and thorough waxing.

What I don’t like about the Rocket III Roadster

Update: Took the Rocket into Youles Blackburn at 3 on Friday – mechanic took it out for a quick spin and on his return rode straight past me and into the workshop. I suspected at that point he agreed with me. Turned out the Throttle Position Sensor was iffy – Youles had it replaced and tested in around an hour and under warranty. Can’t fault the service from these guys. Kept me supplied with good coffee throughout too.

I’m a little miffed about the exhaust as was going to sell it and do something different, but close inspection of the right silencer reveals two small flat spots on the top of the rear edge. Looks like previous owner gently backed her into something. You can just about see them on the high-res image click on image above).

Additionally, what I suspected to be disturbing slack in the primary drive (heavy clunking on acceleration and gearing down) turned out to be the right silencer shifting under positive or negative acceleration. No nuts on the back of its mounting bolts and no lower retaining allen bolt on the heatshield..! Fortunately had some spare nylocks and a bolt of the correct size. Had only done a few days commuting since leaving Youles with it – not saying they gave it to me like that, but for both nuts to be missing is pretty unusual. Oh – and the headlights were not mounted correctly (compare the early pictures with the one at the end of the article) – the bracket wasn’t clipped into the mounting holes on the bottom yoke, had to almost remove the top yoke to correct it. Annoying.

Thorough inspection and polish failed to reveal anything else amiss.

What I do like about the Rocket III Roadster

Once I’ve sorted the (suspect) tuning issue, the seating position and the exhaust I think I’m going to be real happy with her.

Missing the Thunderbird just a little though – the Rocket III is nowhere near as attractive but is definitely more suited to me – a large, ugly presence with character.

I’m looking for a quality replacement silencer or silencers (prefer the singular) for the Rocket 3 Roadster and am open to suggestions. I’m not considering the snaked pipe systems I’ve seen – just want something that’ll slip on to the stock header. The Extremeblaster below is the kind of feel I’m going for…

As mentioned above, the sound and look of the Rocket III Roadster exhaust is one of the things that, in my opinion, let it down a tad. Enter the enthusiastically titled ‘Extremeblaster XB08’ slip-on tuneable silencer. Headphones or decent speakers please and just give this badboy a listening to. Exactly the appearance and sound I’m looking for. If I can’t find anything similar in the UK to replace the gargantuan stock system and bypass that complex cat then I may just have to order one of these from our cousins across the pond.

Couldn’t find anything else I really liked so ordered Extremeblaster XB08 from the States (£250 including delivery). Estimated delivery June 15th – 21st. That’s so long away…. If I don’t die of impatience before then I’ll post a vid when it’s on (Update: Add two day delay at customs and £26 import duty).

My favourite room in the house – cold beer, great view and birdsong. 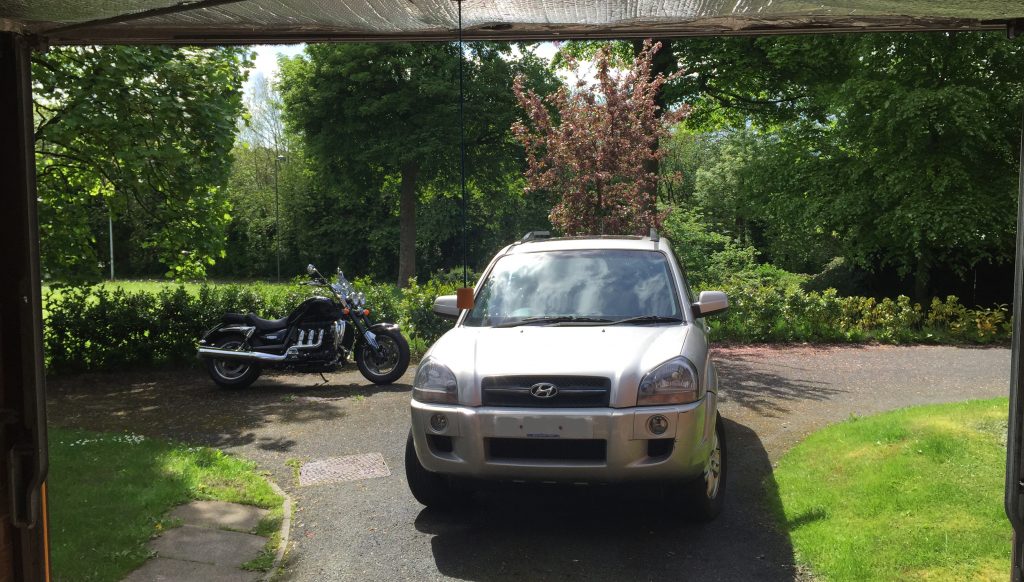 View from the Man Cave 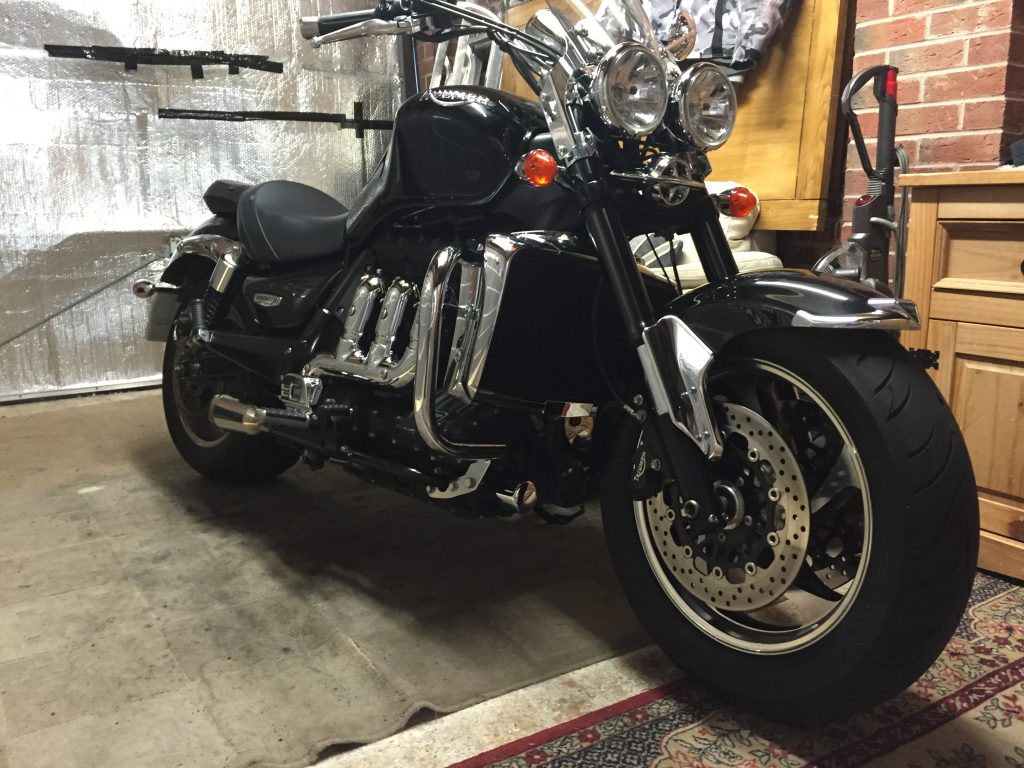